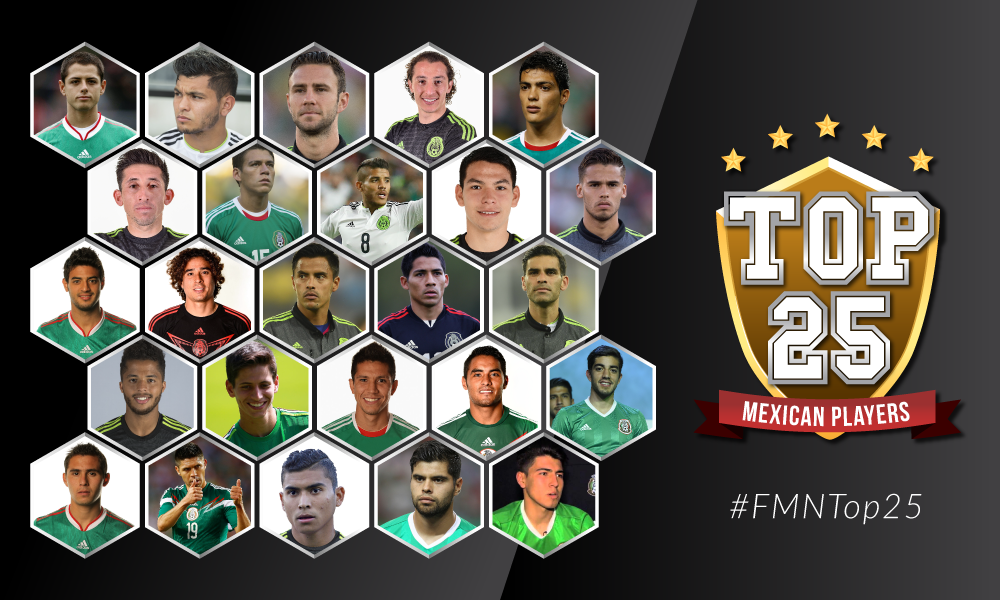 If you aren’t aware of my current project, I will be collaborating with other El Tri experts every month and rank who we deem to be the best Mexican players at the moment. It isn’t a “best of the month” list, but recent performances will of course influence our decisions. It should be fun.

Remember, these rankings are subjective. My main goal is to inspire discussion and conversations about our top players. Let us know any and all thoughts.

1. Javier Hernandez
Club: West Ham
Age: 29
Position: Striker
“One would think moving Chicharito off the wing and more centrally would help both the player and the club. One would think…” -Jason

2. Andres Guardado
Club: Real Betis
Age: 31
Position: Midfielder
“El Principito continues to have a significant hand in most of the Beticos’ goalscoring chances, and his La Liga-leading six assists in seven matches are a reflection of this.” -Steve

4. Jesus Manuel Corona
Club: Porto
Age: 24
Position: Midfielder/Striker
“With a goal and an assist, Tecatito’s has a decent start to his Porto season. But as ever, holding down a place in the team has proven a challenge, with Corona averaging 54 minutes per game.” -Tom H

5. Hector Herrera
Club: Porto
Age: 27
Position: Midfielder
“After some ups and downs over the past few years, it’s now highly important for Herrera to hold onto some consistency before the World Cup.” -Cesar

8. Jonathan dos Santos
Club: LA Galaxy
Age: 27
Position: Midfielder
“Jona has been inconsistent since moving to MLS. He needs to improve his form, maybe a Liga MX loan in winter will help.” -Raul

9. Raul Jimenez
Club: Benfica
Age: 26
Position: Striker
“Raúl desperately needs more starts this season. If he gets them, Chicharito has competition for the starting spot up-front in Russia.” -Tom H

11. Marco Fabian
Club: Eintracht Frankfurt
Age: 28
Position: Midfielder
“Both Frankfurt and El Tri fans will be hoping for a full return to form for a player that was on the top of his game pre-injury.” -Jason

12. Guillermo Ochoa
Club: Standard Liege
Age: 32
Position: Goalkeeper
“Guillermo Ochoa’s club struggles have apparently followed him to Belgium, as Standard Liege sit four points above the drop zone with the league’s second worst goal-differential. One has to ask as to whether Ochoa’s weaknesses are bad enough for Rouches’ manager Ricardo Sa Pinto to make a change between the sticks.” -Steve

13. Carlos Salcedo
Club: Eintracht Frankfurt
Age: 24
Position: Defender
“On the positive side, he has adapted well to Germany. Unfortunately, he needs to stay healthy.” -Raul

14. Javier Aquino
Club: Tigres
Age: 27
Position: Midfielder/Winger
“Aquino’s had to play deeper at times this season, but has still produced some high class displays for Tigres. Almost a certainty for the World Cup squad.” -Tom H

15. Diego Reyes
Club: Porto
Age: 25
Position: Defender
“Will he earn minutes as a defensive midfielder or central defender? Reyes has the capabilities to thrive in these roles, but has yet to truly shine for the national team. If not, a name like Edson Alvarez can easily replace him.” -Cesar

16. Erick Gutierrez
Club: Pachuca
Age: 22
Position: Midfielder
“His inclusion in the latest Mexico roster is a great sign for his future with the national team.” -Jason

17. Edson Alvarez
Club: America
Age: 19
Position: Defender/Midfielder
“Initially filling in for Paul Aguilar, the former Mexico U-20 international has relegated the once Mexico stalwart to a bench role for the second place team in the Apertura table. And with that has come a featured role for El Tri as an outside defender.” -Steve

18. Nestor Araujo
Club: Santos Laguna
Age: 26
Position: Defender
“A favorite of JCO has been steady for Santos and cemented his spot in Mexico’s defense.” -Raul

20. Rodolfo Pizarro
Club: Chivas
Age: 23
Position: Midfielder
“Although he was left out of the latest call-up, Pizarro has the talents to eventually sneak back into the squad before Russia 2018.” -Cesar

21. Giovani dos Santos
Club: LA Galaxy
Age: 28
Position: Striker
“The argument for his exclusion from the World Cup squad gets stronger with each Galaxy match.” -Jason

23. Elias Hernandez
Club: Leon
Age: 29
Position: Winger
“Has had a solid season but has gone under the radar. One of Mexico’s better domestic based players.” -Raul

25. Omar Govea
Club: Royal Excel Mouscron
Age: 21
Position: Midfielder
“No surprise to see Govea make his debut in the Mex Top 25 this month. If he maintains his form abroad, a call-up for El Tri will become inevitable.” -Cesar