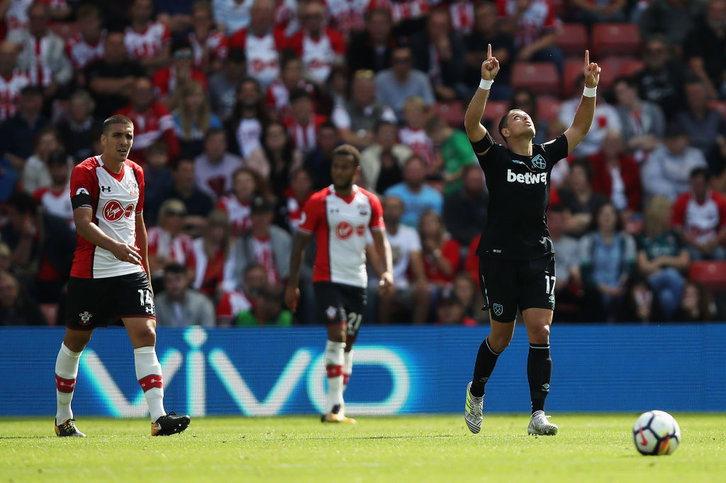 Despite not getting a win against Manchester United last weekend, fans and critics could see the determination Javier ‘Chicharito’ Hernandez had returning back to the EPL. This weekend, the determination came out with delivery from ‘Chicharito’ when West Ham needed it most. After a rough first half that saw Amautovic be sent of in the 33rd minute and two goals from Southampton in the 11th and 38th minute, it would be ‘Chicharito’ that would help the team go out with a fight. Just before the break, ‘Chicharito’ would score for his team off a deflection from a shot by Antonio. He would equalize the match in the 73rd minute off another deflected shot but that did not stop Southampton from winning the match 3-2.

Still, the quality Hernandez brings to the team and leadership he possesses should continue to grow. With a call-up to the qualifiers next week, this confidence should transcend on the national stage as well.

West Ham also won their match on Wednesday against Cheltenham for the Football League Cup, 2nd Round.

Hirving ‘Chucky’ Lozano continues to shine over at PSV. In the club’s recent match against NAC Breda, the team as a whole dominated with Lozano taking advantage of his opportunities. PSV was up 2-1 by the 60th minute but Lozano took on the defense once again unafraid to take a shot on goal and securing the ball into the back of the net. PSV would win the match 4-1 and secure the three points.

‘Chucky’ is also amongst the call-ups for the upcoming qualifiers and with a handful of strikers, he’s certainly made a case for himself to possibly start.

After the unfortunate attacks on Barcelona, the focus of the match between FC Barcelona and Andres Guardado’s new team of Real Betis was on unity. The game ended in a 2-0 victory for Barcelona with goals from Messi and Sergi Roberto but the match was also a reintroduction for Guardado into La Liga. Alongside being named as one of Real Betis’ captains, Guardado’s leadership was seen on the field. Advising players and creating plays for his teammates was refreshing to see against one of Europe’s biggest clubs. With the current dilemmas facing Rafa Marquez off the field, Guardado being able to step up on the field would be adequately appropriate.

The continued saga of Guillermo Ochoa’s European misfortune unfortunately continues with his current club, Standard de Liege. During their match against Zulte Waregem, Ochoa was exposed to bad defending and bad decisions. The goals came later into the second half but once they came, they came at staggering rates. Four goals within twenty minutes is not a good sign for things to come for Ochoa in Belgium.

Only ‘Tecatito’ for Porto

Of the four Mexicans currently with Porto, Jesus ‘Tecatito’ Corona was the only player to start against Moreirense on Sunday. The game ended in a 3-0 victory but not much influence came from the Mexican Europeos. ‘Tecatito’ helped create some plays and Miguel Layun eventually subbed in during the 83rd minute but the time spent at Porto has begun to be unbeneficial for some of El Tri’s necessary players.