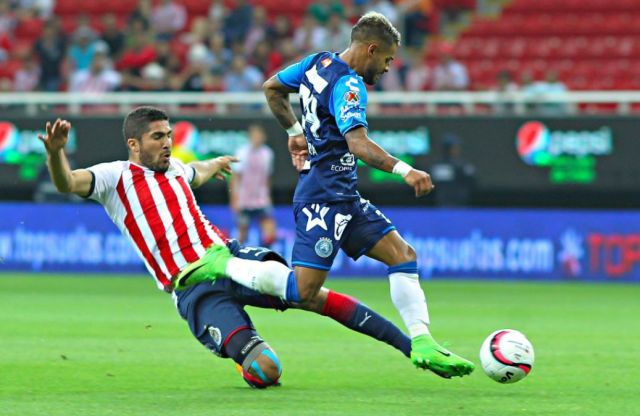 Chivas drop to bottom after controversial defeat to Puebla

Liga MX, the league of parity, the league where a team’s fortunes can change at the drop of a hat. This has certainly been the case for Chivas, who sit in 18th place following last season’s Liga MX victory.

Chivas dropped to bottom after the table after Saturday night’s one-nil defeat at home against Puebla, a match dominated by difficult, and controversial, refereeing decisions.

The decision to disallow an early Chivas goal was a challenging one, and, although it took a bit too long to be made, the outcome was absolutely correct.

Then, the real controversy. Jair Pereira was sent off for taking down Gabriel Esparza when the Argentine was through on goal. The replay showed that there was no contact, but for me, the decision was still correct.

Pereira’s slide tackle was reckless, didn’t win the ball, and forced Esparza to change direction to avoid being taken out by Pereira. Esparza may have fallen over as a result of having to change direction, or may have dived after changing direction, but this doesn’t change the fact that it was a foul.

Think of it this way, if Pereira hadn’t have made that slide, which didn’t win the ball, Esparza would have had a clear chance on goal. Pereira illegally impeded his route to goal, and as he was the last man, the red card was the correct decision.

The decision which Chivas fans can rightfully feel aggrieved about is the penalty call late in the second half. Substitute Javier “Chofis” López was fouled, and Chivas should have had an opportunity to earn a point.

5 starts on the wing

With Chivas bottom and facing a mid-week game, Matías Almeyda may start to think about changing up his starting line-up. Carlos Fierro should be first to be axed. One dribble and one cross in five starts is a minimal return for a winger, and Isaac Brizuela and Chofis López present quality alternatives. Chofis is currently averaging a league-high six key passes per 90 minutes, and should have won the penalty on Saturday, so desperately deserves more game time over Fierro.

Performance of the week- Tigres

Ricardo “Tuca” Ferretti has thoroughly enjoyed facing off against Francisco “Paco” Palencia, and once again earnt a comfortable victory over Pumas on Saturday night.

Tigres controlled the match with 69% possession and cruised to a two-nil win, preventing Pumas from attempting a single shot on target.

The two Tigres goals were top quality. Eduardo Vargas did extremely well to get across his marker in the box and find the top corner with his header, whilst André-Pierre Gignac scored a typical, wonderfully-struck half-volley. The victory would have been even more comfortable had the Frenchman, who had six shots on target, put home his penalty.

A good win, but once again one that left more questions than answers. Tuca returned to the 3-4-1-2 after reverting to a 4-2-3-1 last week, will this end up as Tigres’ main formation this season? And who will start in the midfield? Tuca unbelievably dropped the player of the season so far, Lucas “Chino” Zelarayán, against Pumas, in favour of the more defensive Israél Jiménez. Will a signing finally be made, or will this become the regular Tigres midfield?

Cruz Azul remained unbeaten for the season, and moved up to third in the table with victory over Atlas. It’s still fairly early in the season, but this is La Máquina’s most promising start to a season for a few years.

So far this season, we’ve witnessed a major improvement. Shots per goal has dropped from 13.1 to 8.6, with shots conceded per goal conceded increasing from 8 to 11.5.

There have also been many noting how effective Cruz Azul’s pressing game has been this season. La Máquina were able to regularly man-mark against Atlas, and sprung a few successful offside traps. Juan Pablo Vigón, Atlas’ central play-maker following Clifford Aboagye’s injury, saw a lot of the ball, attempting a league-high 84 passes, but didn’t make a single key pass. Cruz Azul did very well to prevent him from creating.

There are still question marks over whether there’s sufficient creativity in Paco’s attack. Francisco “Gato” Silva excelled on Saturday with six key passes, but is usually more effective without possession than with it, similarly to fellow midfielders Gabriel Penalba and Rafa Baca. Ángel Mena can be excellent on the right-wing, but can go missing, whilst new signing Édgar Méndez has been extremely disappointing from a creativity perspective, averaging less than one key pass, cross and dribble per match.

However, if Felipe Mora can keep up his fantastic 33% shot conversion rate, they should find enough goals to remain in liguilla contention.