You know the drill. Every Thursday I send out a couple of tweets asking you to send me any and all questions. I select three to answer on video and then answer the rest here.

Let’s see what we have this week.

When do you think the teams are going to take the CONCACAF Champions league more serious?

I think the new format, which goes straight into a knockout round and begins early next year, will be taken more seriously than normal. That said, I don’t think Liga MX clubs will truly start to care or give these matches much importance until somebody from outside of Mexico wins the title.

Why are Mexican fans the saltiest? Is it because of the Manteca?

Haha, is this in reference to the Jonathan dos Santos deal? You can’t just assume we are all salty about the deal, but here are my thoughts.

I think the issue here is that some of that animosity from the USMNT vs El Tri rivalry permeates into ideas and perceptions of MLS, at least from a Mexico fan point of view.

I think this is a great move for MLS and agree that it will help fuel the league, but from the point of view of many Mexico supporters, many don’t care much about the growth of MLS. The other problem at hand here is that even within the small group of those who support MLS and El Tri, such as myself, there is a general disappointment of Jona not continuing to test and challenge himself abroad.

That said, we can be a little salty.

Ok real question. If we got MLS best American 11 vs Liga MX best Mexican 11 who is better? Who wins? Who’s deeper? Talent? Etc.

Liga MX is deeper, but the big problem here is that there is a lack of minutes for young Mexican players due to the short tournament format. If the league truly wanted to develop more young talents, they should consider extending the season.

If Jona and Gio don’t win an MLS title by 2020, did they waste what’s left of their careers? Also, next Europeo to come to US or MX?

I don’t know if “waste” is the right word here. Jona will also only be 30 three years from now. I’m sure he could still be a massive talent in MLS or Liga MX at that point. Was the decision to move to MLS right for their careers? I don’t think so and I believe they could achieved more in Europe, especially Jona.

Yet, do I understand why they did it? Yup, and if I was one of them, I would also be tempted by the money and lifestyle.

Next Europeo to return: Hector Herrera

What are your thoughts on the Mexican players joining Rangers in the Scottish Premiership and will you watch any games? #AskCesar

I find it to be fascinating more than anything else. It’s not a big move and they aren’t true representations of the best that Liga MX can offer. I don’t think it will help their case for the national team, but at the least, I applaud their willingness to take a risk in a league outside of North America.

Why do you look so chill all the time? What do you do to take the stress away?

Real talk, I have actually dealt with some serious anxiety for most of my life. When I was a kid, I used to get panic attacks all of the time, it was really embarrassing. A few years ago I decided to go to therapy which really, really, really helps. That and making the choice to face my fears instead of running away from them has helped me manage my anxiety. Also, jogging. Jogging is huge for my well-being.

I am fairly chill, but it took a lot of work to get here haha.

What team do you support? #AskCesar

Is it reasonable to expect Tecatito to be back with el Tri on Sep. 1 or should I just start drowning my sorrows with piña coladas?

Tecatito is currently dealing with some slight muscle problems right now but he should definitely be good to go by Mexico’s next World Cup qualifier.

This summer was a disappointment but 2013 was awful. That award goes to the year that I don’t like to remember.

Guardado, Chicharito, Jonathan, and Salcedo; all wont be playing in the Champions/Europa League this upcoming season, thought on this?

Moreno, Tecatito, Layun, Herrera, (maybe Reyes) and Jimenez will still have Champions League opportunities. In the Europa League, Vela will be there and there’s also a chance for Lozano if PSV qualify for the group stage.

That said, I get your point and do wish more players were taking part in the CL. Not sure how Ochoa wasn’t able to find at least one club in either of those competitions that could have utilized him.

Should we blame Gio for ruining the national team?! #HotTake

That’s a scorching hot-take my friend, but I don’t think he is ruining the national team. In truth, thanks to a number of talented attackers and midfielders, Mexico can do very well with or without the Dos Santos brothers.

There’s a sense LigaMX is greatly superior to MLS. What’s the basis for this assessment? As a fan of both, I’m not seeing it.

It’s not greatly superior. Is Liga MX better? Yes, but I believe that the gap is closing. I honestly wouldn’t be surprised if an MLS club wins the CCL title within the next few years. 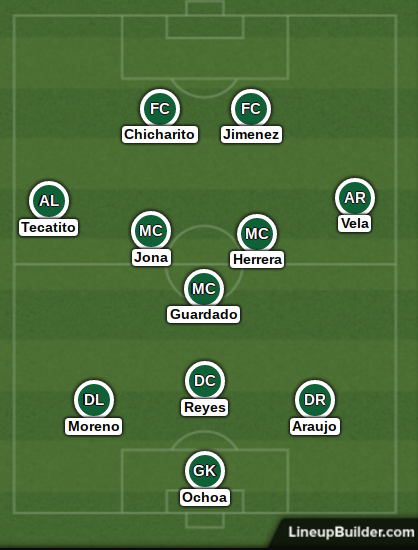 Why is miguel layun so bad on defense? Edson Álvarez time

Alvarez is doing great but I still have faith in Layun…for now. Let’s see if he can at least get a starting role for Porto again this season.

I would love it if he moved to a bigger club but all signs have pointed to the player and club rejecting offers. I think he still wants to play one more season with Real Sociedad before leaving.

If you’re stranded on an island and can only choose one #LigaMXEng reporter to deliver breaking news who would it be and why?

We all know that the answer here is Tom Marshall. Sometimes I think I work really hard and then I see how often he writes and reports. Don Tom da gawd.

Bury me under the spot in the Rose Bowl where Gio made Tim Howard look foolish.

Asada is always great but it gets boring sometimes. Pastor wins.

I think so. I like the idea of using some of those talented backups in the Gold Cup instead of sitting on the bench in the Confed Cup. Guys who weren’t guaranteed starters like Lozano, Marquez and Damm would have been great in the Gold Cup.

What did you think about Lozanos PSV debut? How good is Betis?

I wish I could give an answer to either of these. I didn’t catch the debut and don’t know much about Betis. It is quite funny though to suddenly see random reporters/fans who are “Betis experts” out of nowhere.

I wouldn’t be surprised if either of them left, but I think Joe is slightly more likely. He’s had offers from MLS clubs and another good season could mean a move north of the border in the near future.

In a hypothetical scenario that Mexico were to join conmebol,do you think they would take a wc berth with them leaving concacaf with only 3?

That’s an Infantino-level question. In that hypothetical, I say Mexico wouldn’t be able to immediately take that WC berth but that CONMEBOL would eventually garner another spot.