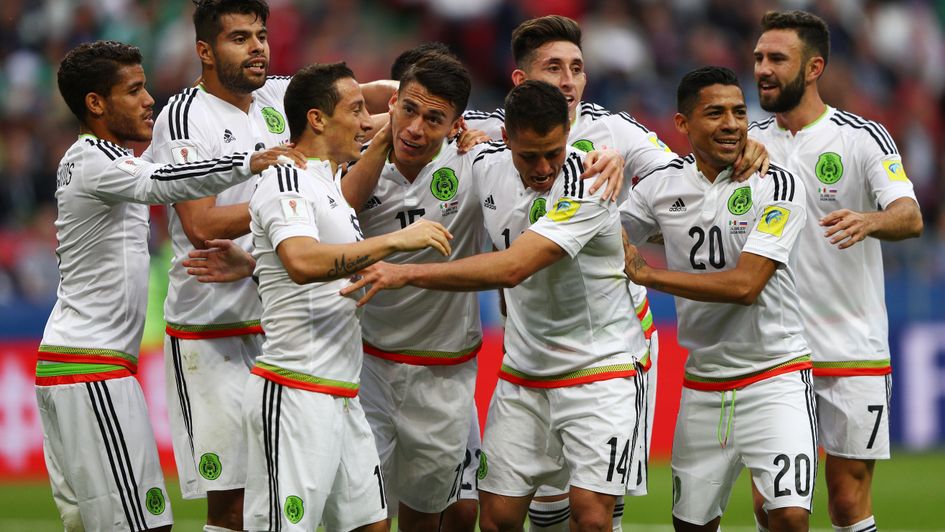 Mexico secured their place in the semi-finals of the Confederations Cup with a 2-1 victory over hosts Russia. As ever, it wasn’t an easy match, and there were plenty of up and down moments for Mexico, but they came away with the result. Tom Harrison believes there’s reason to be optimistic, and reason to be cautious. Here’s why…

Reasons to be Optimistic

Defensive improvements: Defence has undoubtedly been Mexico’s main weakness recently, particularly defensive transitions. Mexico’s defence has far too often been left with a lack of cover from midfielders when El Tri lose possession, giving opponents the opportunity to pull apart Mexico’s defensive shape. This, combined with the high lines adopted, and the lack of pace when Juan Carlos Osorio uses centre-backs at full-back, has led to opposing forwards getting in-behind the Mexico defence. Whilst there’s still question marks over midfield cover with Héctor Herrera at defensive-midfield, Mexico were much more successful at delaying counter attacks against Russia, which gave time for midfielders to make recovery runs, for Mexico to regain their defensive shape and potentially create a defensive overload.

Importante to note…. Mexico was behind in the last 4 games and managed to come back! Mentally this team is different.

Mental strength: Mexico came from behind to avoid defeat for the fourth consecutive match. This, without long-term captain Rafa Márquez starting in any of the matches. Many felt, particularly after the Chile collapse, that El Tri needed Márquez on the field, despite his declining standards, to lead the side. Recent comebacks suggest that this is no longer true, and that Andrés Guardado and Héctor Moreno are doing a good job at stepping up into leadership roles. However, Rafa is still part of the squad, so it can’t be argued that he’s having no influence on the team. But perhaps his influence is best used off the pitch.

Quick link-up: There were plenty of quick, clever passing moves on show from Mexico against Russia. Particularly impressive were the left-sided combinations between Luis Reyes, Javier Aquino, Andrés Guardado and Javier Hernández, after Reyes and Aquino came on. Hernández has been developing his all round play over the past few years, and this showed in Kazan, with Chicharito regularly making himself an option for teammates thanks to his hard work and intelligent movement. The midfield pairing of Héctor Herrera and Jonathan Dos Santos also impressed, with Herrera’s eye for a pass and Jona’s forward runs often breaking Russian defensive lines, similarly to in the US and Portugal matches.

Say what you will about JCO, but the man is accomplishing his goals with #ElTriEng in the Confed Cup and World Cup qualifying.

Mexico an aerial threat yet again: A Mexican centre-back once again scored a header, and it would have been two centre-back goals had Héctor Moreno not been slightly offside. This was yet more evidence that Mexico have become a major attacking threat in the air. It’s impossible to pinpoint the exact reason why, but the workings of Juan Carlos Osorio, who has a preference for tall players, are likely a significant cause.

Reasons to be Cautious

Defence still a major worry: Mexico may have displayed defensive improvements, but they still didn’t put on a particularly strong defensive performance against Russia, who missed a few good chances. If El Tri are unable to delay counter-attacks, the defence can be very quickly taken apart, partly due to how often Mexican defenders dive in when trying to win the ball. Other defensive concerns include Néstor Araújo’s poor balance and mobility, and how Mexico struggled to deal with Russian wonderkid Aleksandr Golovin, who glided through the defence on more than one occasion.

Néstor Araújo doesn't fill me with confidence. His balance and mobility is poor, and he can be liable to misread the flight of the ball.

Guardado’s ban: Andrés Guardado will miss the semi-final after picking up his second yellow card of the tournament. Missing Guardado is always a big blow for Mexico, but it’s especially significant considering the players at Osorio’s disposal. Osorio seems to prefer using the 4-3-3 formation with his strongest side, and therefore needs three central midfielders. Frustratingly, Osorio only brought three ‘natural’ central-midfielders to Russia with him, so replacing Guardado is a major headache, which is highly likely to reduce the quality of Mexico’s side. Luis Reyes was moved into Guardado’s position for the final 20 minutes against Russia, suggesting that JCO is considering using the Atlas player in the semi-final. Considering that Reyes only has one season’s worth of experience at left-back or left-wing-back in Liga MX, this would be a bizarre, and risky move. Osorio does love to surprise though.

Osorio giving the test run to the possibility of seeing Luis Reyes taking over Guardado’s spot in the possible next match.

Tougher tests lie ahead: Russia may have had the support of the home crowd, and may have thrown plenty at Mexico, as they did in their previous match against Portugal, but they aren’t currently a great side. Mexico are highly likely to face Chile or Germany in the next round, and both should represent a step-up in class, even if Germany have taken their ‘B’ squad to the Confederations Cup. Portugal may have been a strong opponent, but their defensive, counter-attacking style allowed Mexico to play out from the back. On the contrary, Chile or Germany will press Mexico’s defence, and if they concede possession deep in their own-half, it could spell disaster, especially if counter attacks aren’t delayed. It will be fascinating to see how this Mexico team, which continues to leave fans with more questions than answers, will cope with the challenge.

Mexico 2, Russia 1: Brave goal from ‘Chucky’ Lozano eliminates the hosts from the Confederations Cup.
Tactics with Tom: Why Delaying Counter-Attacks is so Important to Mexico
To Top