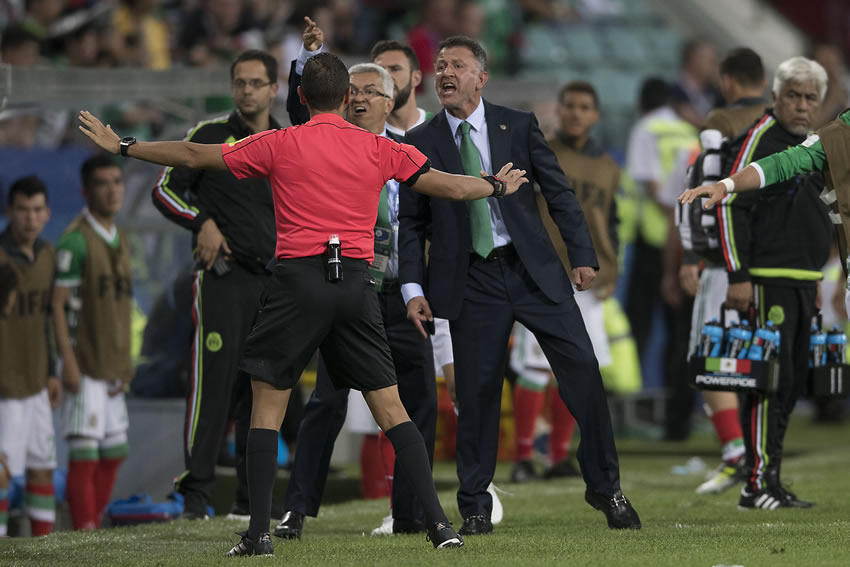 Taking some fundamental issues out of the picture for now, El Tri goes into Saturday’s final group stage game against the hosts in first place in Group A. However, El Tri‘s ticket to the Confederations Cup semifinal, and thus the two additional games, and the guaranteed quinto partido, is far from certain.

The selection led by Juan Carlos Osorio can book their place in the semifinal on Saturday with either a win or a draw against Russia. The Sbornaya, who will get the advantage of most of the stadium being behind them, know they have to win after losing 1-0 against Portugal in Wednesday’s second game.

Historically, Mexico has never won when they faced the Sbornaya in any competition. But they have not played the Sbornaya in the 21st century. But that is likely ancient history when compared to the immediate matters facing El Tri.

The decision by Juan Carlos Osorio to rotate out eight of the eleven players who played Portugal to a 2-2 draw on Sunday against the All-Whites backfired nearly completely, outside of the fact Mexico even earned the three points. The hyper-rotaciones did not allow Osorio’s players to operate much as a collective against New Zealand, and it forced the team to play their second match with a disjointed, but individualistic approach.

It’s something the Sbornaya, with a lineup that remained mostly the same between games against New Zealand and Portugal with some changes in between the two games, could exploit. However, Juan Carlos Osorio, in his press conference, noted that he would use a lineup similar to the one that played against Portugal.

There would be some differences in the lineup. Right back Carlos Salcedo is now out of the Confederations Cup due to his dislocated shoulder and center-back Hector Moreno, who came off injured in the same game, is a game-time decision for the match even though all signs indicate that the new Roma man is expected to start.

When asked about what challenges El Tri would face when they take on the hosts, Osorio did not hold back on calling the Sbornaya a physical side. “We will play against the most physical team in the tournament, we have to compete with them in that too,” he noted,  “What stands out is the aerial game (Russia), in the first game we competed against one of the best in the world, we know what to do.”

Osorio also noted when asked about what Mexico’s lineup will really look like, and not just the hint about the team from Sunday, that “Until we know Russia’s lineup, we will not know what they have. We’ll be prepared for what they’ll present in the match.”

Captain Andres Guardado also joined Osorio at Friday’s press conference to elaborate on the team’s mentality and how they are handling Osorio’s rotaciones. “In this group, we will trust that whoever plays will do well, he explained, “We’re not thinking with the fear to lose. The group is totally focused. Let’s do what we know how to do, motivated against the hosts.”

One added thing Juan Carlos Osorio added in his press conference was that his team had worked on how they would handle refereeing decisions that would go against them. Osorio noted, “The refereeing won’t influence us tomorrow. The team that plays better wins, and we must work on what we play for. We believe in Fair Play, FIFA is gaining the trust of those who love football. We trust in fair refereeing.”

The team, because of how the over-rotaciones has left the team disorganized in significant matches, has experienced a lot of criticism. It had seemed too many players had been rotated in and out of the games, and there had not been a clear setting point of first team or second team players unless the team on those days had really struggled. But despite the blunders against the United States, Chile (in Copa America Centenario), and New Zealand in meaningful matches, the team has largely been effective in the games that have mattered. And Osorio has used the lessons that his team learned in the games where things did not work out to help his team adjust in whatever aspect was necessary.

That is something that the players and manager implicitly know that they have done, and it in many ways has unified them against the local media.

In one other matter of fan chants, Andres Guardado addressed the subject of the famous goal kick chant. “It’s good that the goalie chant has ended in the recent game, Guardado explained, “I hope we stay that way, also in home games.”

There are a number of attackers that El Tri must account for. These might be familiar names like Spartak midfielder Denis Glushakov and Zenit and former Chelsea midfielder Yuri Zhirkov, who are both good on the ball and can read the game well. But these also include striker Fyodor Smolov and defender Georgi Dzhikiya, who have been close to putting the Sbornaya in a situation where its game against Mexico should not have mattered so much.

It was something former Russia midfielder and current pundit Igor Titov noted, as picked up by Russian Football News (RFN), an English-language blog covering the Sbornaya and Russian club football. “[Georgiy] Dzhikiya could have scored at the end,” he noted, “A draw would have been the more logical result. In any case, the fans have reason to hope that the team will progress from the group.”

The match kicks off at 11:00 AM Eastern DST (8:00 AM Pacific) and can be seen on Fox Sports 1 and Telemundo in the United States, and where the networks can be streamed.