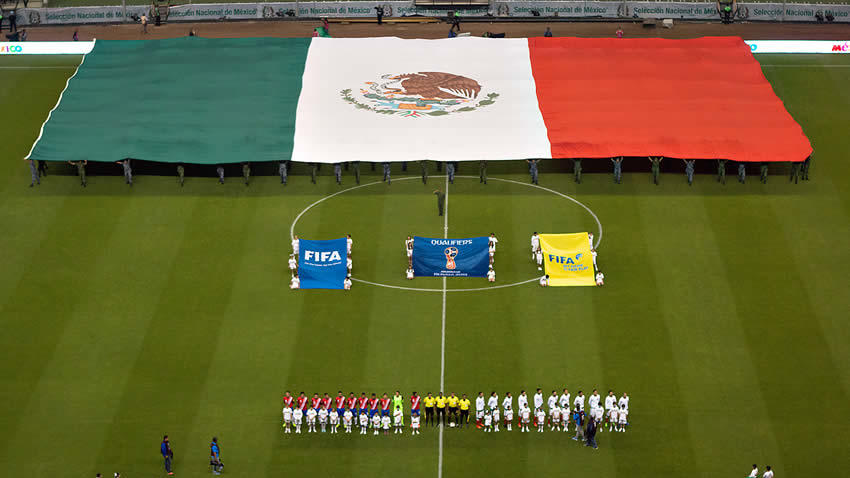 Given that the 2026 World Cup would be the first World Cup with not only 48 teams involved, but also 80 games, the first-of-its-kind three nation bid was the first attempt at a solution to stage the expanded tournament. However, the bid, if successful, would only be the second-ever joint bid to host the FIFA World Cup after South Korea and Japan did so in 2002. At the continental level, jointly-hosted tournaments have happened more frequently with Poland and Ukraine co-hosting UEFA Euro 2012 and the Confederation of African Football (CAF) has sanctioned two joint-hosted Africa Cup of Nations (2000 and 2012).

In a joint press conference, USSF president Sunil Gulati, standing along side FMF president Decio De Maria and CSA president Victor Montagliani, noted that in some specifics of the plan, the United States would host 60 of the 80 games, while Mexico and Canada only host ten games each, and none of the games beyond the Round of 16.

This, nevertheless upset many in Mexico, who criticized Decio de Maria for allowing Sunil Gulati and the USSF and Soccer United Marketing’s marketing and promotional machine to walk over Mexico’s soccer history and culture. These sources of criticism came from not only a Record headline in which led “Mexico [and Canada] could get crumbs”, but also most loudly from TV Azteca presenter Gerardo Velazquez, who slammed the negotiating skills of Decio De Maria.

“What great business!” Velazquez explained, “I think 10 games is an embarrassment. It is something that only demonstrates the power Sunil Gulati has in the region and that the real giant in CONCACAF is the United States and not Mexico.”

Others, including MedioTiempo, also ran with headlines about Mexico only getting ten games. However, Ricardo ‘Tuca’ Ferretti noted that given Mexico had hosted two fairly significant World Cups before–the 1970 and 1986 editions–with great success. Mexico has several stadiums that would immediately qualify to host for the FIFA World Cup as is, including the Estadio Azteca (Mexico City), Estadio BBVA Bancomer (Monterrey), Estadio Jalisco (Guadalajara), Estadio Olimpico Universitario (Mexico City), Estadio Chivas (Zapopan), and the Estadio Universitario (San Nicolas de los Garza). [Exceptions could be made for most of Liga MX team’s stadiums which can house more than 20,000 fans, as well as the Estadio “Chivo” Cordoba in Toluca which hosts Ascenso MX-based Potros UAEM, and can house 33,000 spectators.]

Given the potentially bad deal that Decio de Maria negotiated,

There are still other hurdles to the joint bid by the United States, Canada, and Mexico. Gianni Infantino has expressed reservations over U.S. President Donald Trump’s anti-immigration policies, including the construction of a wall along the Mexico-U.S. border and travel bans against nationals from several Muslim-majority nations. And such a large proposal would also likely need the support of members of the U.S. government, including President Trump. However, Gulati noted in the joint press conference that he had the White House’s full support in the potential bid.

And along with the bid proposal, CONCACAF has asked the FIFA Congress for a short non-competitive period in which showcases the technical specifications of its bid, which covers everything from stadium capacity to highway and airport capacity and availability. These might be, as Sam Borden writes for ESPN, necessary for FIFA ahead of the first World Cup at its new size and infrastructure requirements.

It is also possible that CONCACAF’s bid will not be the only other bid for the 2026 World Cup that’s submitted to FIFA. While UEFA (with Russia hosting the 2018 World Cup) and AFC (Qatar with the 2022 World Cup) are excluded from voting for the 2026 World Cup, other bids from the Confederation for African Football (CAF), Oceania Football Confederation (OFC), and CONMEBOL could still come in, although Argentina and Uruguay are reportedly looking more toward a 2030 bid, in honor of the 100-year anniversary of the tournament.

Unlike in 2018 and 2022, when bids were decided by a select Executive Committee, representatives from all 211 member national football associations (FAs) will get to vote with one nation getting one vote. But before the votes could officially be cast, if they do get cast, CONCACAF is seeking approval of its bid proposal by the end of the year (and into 2018, ahead of the FIFA Congress in Bahrain).

If the joint bid is successful, it would not only mean that Mexico would become the first nation to host the FIFA World Cup for a third time, it would also result in a re-organized FIFA World Cup qualifying tournament with potentially three fewer qualifiers from said tournament. Although many would suspect that Mexico would be playing a lot more friendlies, with only Gold Cup and Confederations Cup games being significant, a proposed CONCACAF Nations League, which would replace nearly all the friendlies Mexico and the United States have played in many international windows, could already be well in place by the beginning of the 2026 World Cup cycle.

However, there is the small matter of the official vote on the joint bid and other bids to host the 2026 FIFA World Cup. And FIFA holds its presidential election in 2019, one year before the joint bid is supposed to be put to an official vote. It is quite possible that Gianni Infantino, who was supportive of the joint bid, would not be the person in FIFA’s highest position.

El TRI-View — If No Azteca, then…
EL TRI-VIEW – РОССИЯ or Gold?
To Top