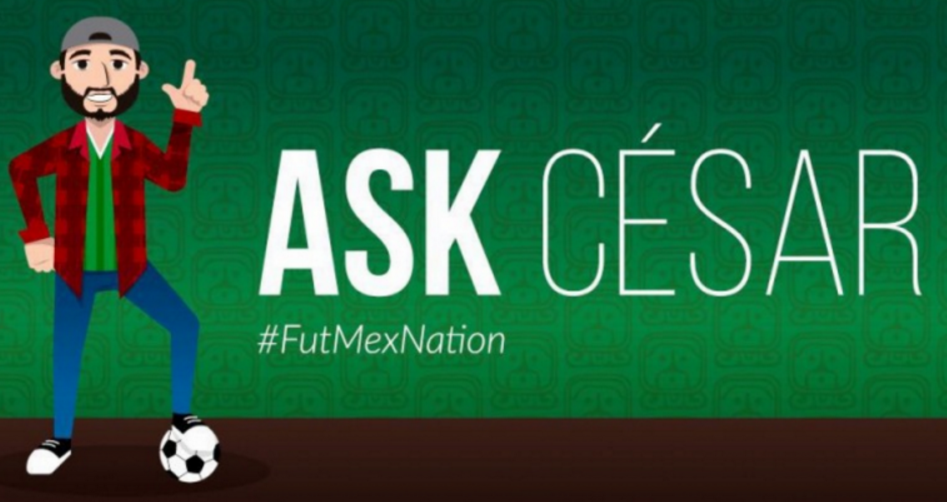 Welcome to the new (and improved?) version of #AskCesar! This week we are going to go through all of your questions through this article and a quick video.

Let’s see what you all asked me this week!

@cesarhfutbol @FutMexNation can we puhhhh-lease get rid of rotations? Puhhh-lease? Let’s get JCO a twitter handle just so we can bug him

To be fair, he’s definitely going to go through some rotations in the upcoming matches because of injuries to key players. Also, now I can’t help but think about what JCO’s username would be. I wonder if he would…rotate through several different options.

@cesarhfutbol @FutMexNation Can you convince Cesar Montes to go to Europe? That’s the only way he’ll get noticed by JCO! XD

lol. To be honest, I’m not too worried about Cesar Montes. He will inevitably go to Europe and get a call-up for the national team. Once the Gold Cup rolls around this year, that’s when he will get his chance to shine. If he doesn’t, that’s when we can really start to get bothered about him not getting a call-up.

@cesarhfutbol are you as worried as I am about our fullbacks (or lack thereof)?

Not really, all of this seems to point to JCO working with a backline of three players, so I don’t think it’s that big of a deal. In future matches, especially if Osorio decides to switch a four-man backline, I would like to see names like Raul Lopez, Fernando Navarro and “Chapo” Sanchez given an opportunity for El Tri.

@cesarhfutbol @FutMexNation will Jona Dos Santos ever be given a real shot of some real playing time with El Tri. He’s called but no play

If there was ever a time for Jona to be given another opportunity for Mexico, it’s going to be this month. Even though El Tri tends to work with Andres Guardado and Hector Herrera as the two attack-minded midfielders, I’m hoping that JCO has been paying attention to the impressive season that Dos Santos has had with Villarreal.

My guess is that we will see Jonathan given the start in at least one game this month.

Yeah, there’s definitely a chance that these might end up as unexciting games. Despite Costa Rica’s recent resurgence, it might be too much of a risk for them to chase a win against Mexico in the Estadio Azteca. As for Trinidad & Tobago, even though they will be at home, they will likely park the bus.

@cesarhfutbol @FutMexNation 3 back the right formation for Mexico?(considering we aren’t Barcelona?) & you think he called the wrong Montes?

Haha, I do think it’s a little weird that Luis Montes got a spot on the roster. No Erick Gutierrez or Rodolfo Pizarro instead of him?

Also, I’m sometimes hesitant about a three-man backline for Mexico, but I think that’s the right call when both of the upcoming opponents are expected to sit back against El Tri.

We have to pray to the soccer gods that we get more in the future. After Hector Moreno, it’s tough to feel very confident about other left-footed options for Mexico in his position.

I would love to see Aviles in the roster, but according to FIFA’s five-year residency rule, we need to wait until this December or early next year in order for him to be eligible for the national team. Not sure why plenty of journalists believe that he is already able to receive a call-up.

@cesarhfutbol @FutMexNation with injuries to top players, is it time for JCO to scrap his rotations and go with the strongest 11 for these 2

I hope so, but the big question is who are those strongest options to work off of Chicharito? Jesus Gallardo and Carlos Vela? Carlos Vela and Jurgen Damm? A physical frontline with Oribe Peralta and Raul Jimenez working next to Chicharito? #DecisionsDecisions

@cesarhfutbol Raul Jimenez got called up, you think he will be effective despite his lack of playing time with Benfica? #AskCesar

Although Jimenez hasn’t received a start since last year, I still believe that he can be an influential and effective member of the attack. That said, I can’t imagine that he will get more minutes over Chicharito.

Who knows with Osorio though, he might try to place Jimenez on the wing as a more aggressive and physical presence in the attack near Chicharito.

@cesarhfutbol @FutMexNation should mexico be concerned for their lack of fullbacks for the near future? Or play with a backline of 3 cbs?

Believe it or not, I think Mexico has a long list of intriguing full-back options. It just might seem like there aren’t very many after seeing JCO’s focus on central defenders for a three-man backline in the latest call-up.

@cesarhfutbol @FutMexNation looking at this what do say…3 at the back?