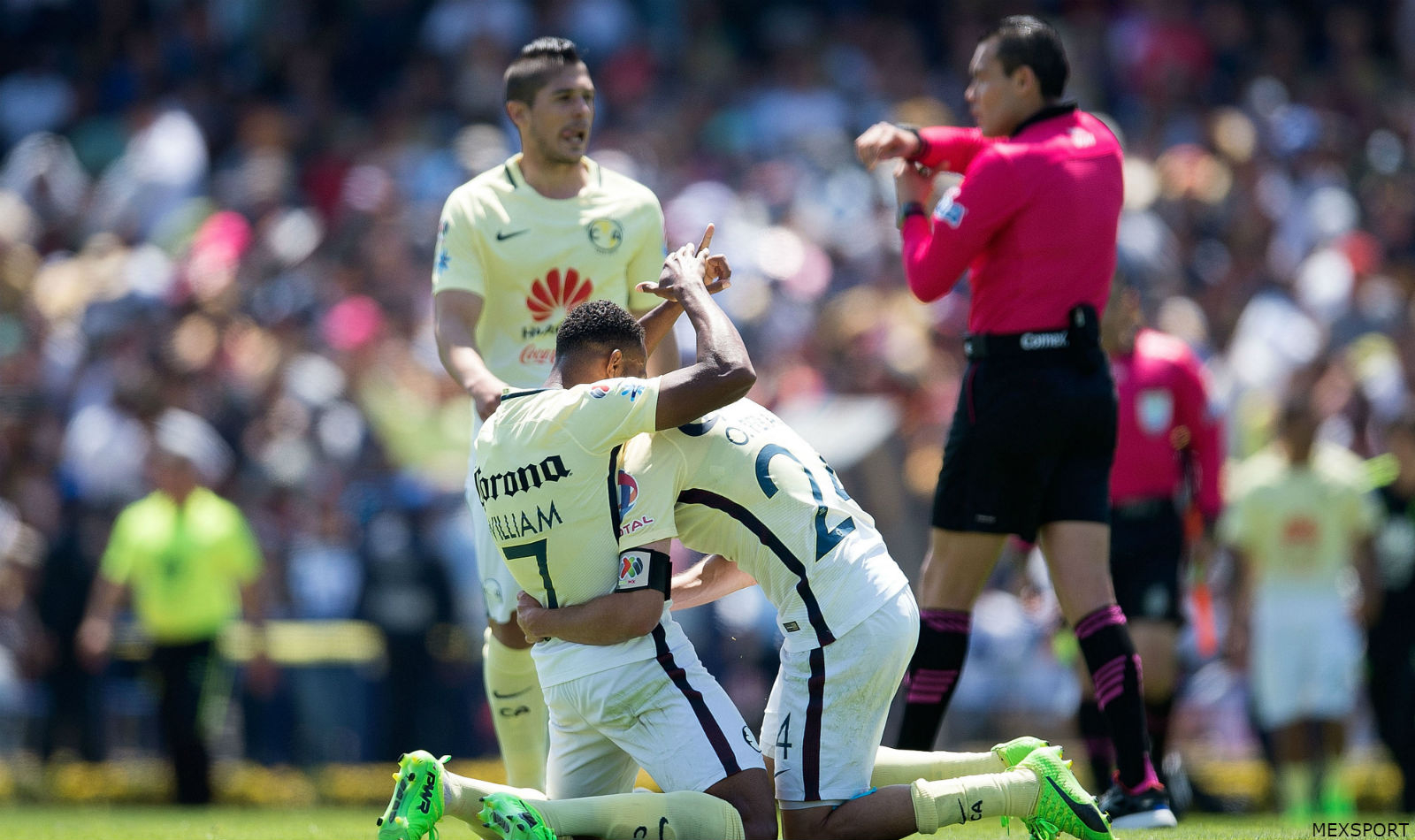 After the referee’s strike, Liga MX returned with a bang, and reminded us all what we’d been missing. Here’s Tom Harrison with his weekend review.

Injuries and suspensions forced Ricardo La Volpe to send out a makeshift side against Pumas on Sunday. The startling line-up included Osmar Mares at centre-back, Edson Álvarez as a right wing-back and 16-year-old Diego Lainez.

Las Águilas came out fighting though, and moved into a surprise 2-0 lead at half-time. Silvio Romero smashed home the first, his first goal in 15 Liga MX games, before Oribe Peralta showed great composure to finish after an Osmar Mares run.

América should have had the opportunity to make it 3-0 from the penalty spot, but their strong claim was turned down, and Pumas made the most of this refereeing decision.

The hosts quickly got themselves back into the game as an unmarked Nicolás Castillo headed past Agustín Marchesín.

Castillo had missed a sitter earlier in the match, but he made up for that by scoring Pumas’ equaliser, aided by poor Marchesín keeping.

At 2-2, the momentum was with Pumas, but battling América stunned the home crowd with a dramatic late winner. Tenatious William da Silva did extremely well to win the ball in Pumas’ half and lay-off Cecilio Domínguez. Helped by Peralta’s block, the Paraguayan found space to shoot, and found the back of the net.

Here's how Cecilio Domínguez gave @ClubAmerica a 3-2 lead 8 minutes from the end of the 90.#ligamxeng pic.twitter.com/BDztKz2lLH

The win moves América into a liguilla spot, and the confidence boost from winning the clásico could prove crucial in their bid to make the play-offs yet again.

With 4 goals, Miguel Sansores played a large role in Morelia’s Copa MX season. On Sunday, he came big for them in Liga MX.

On as a sub for top scorer Raúl Ruidíaz, Sansores headed home in the 91st minute, after a wonderful free-kick from another sub, Rodolfo Vilchis.

Will this last minute goal by Sansores matter in the relegation race? For now, vs 10 man Puebla, it does. #LigaMXEng pic.twitter.com/HwX8oLA1v8

The header gave Morelia all 3 points in Puebla, and will have sunken the hearts of Veracruz fans.

It was a nightmare week for Los Tiburones Rojos, who failed to collect any points from their game against Chivas. Not only did Morelia win, but other relegation rivals Chiapas managed to earn  a 2-2 draw with Necaxa.

These 3 results leave Veracruz 4 points adrift of Morelia in the relegation table, with Chiapas now 6 points clear of Carlos Reinoso’s side. Considering that Veracruz have failed to score in their previous 5 Liga MX games, making up the points deficit looks a huge challenge.

Sinha wins back and forward game at Estadio León

León-Toluca was a strange game. A mix of some clever, incisive attacking football, horrendous set-piece defending, and one moment of magic from Sinha.

Set-pieces dominated the match. Goals from Mauro Boselli, Guillermo Burdisso, Rodrigo Salinas and Fernando Uribe all came from set-pieces, and on none of these occasions was the goal scorer the first player to touch the ball from the set-piece.

There was some controversy about Boselli’s goal as well. The Argentine moved to flick the ball in with his head, but ended up using his arm. The mano wasn’t spotted, and the goal stood.

Perhaps then, justice was done when Jesús Méndez smashed home Toluca’s winner with 6 minutes left on the clock.

Whilst the finish was good, the goal was all about Sinha’s assist. The 40-year-old turned his defender before picking out the most genius of reverse passes. Few players would have had the class to be able to play this through ball.

Gooooool Toluca!!! Jesus Mendez gives Toluca a 3-2 lead seven minutes from the end of the 90 with this. #LigaMXEng pic.twitter.com/Pdn4KDOYIR

The result could be an important boost to Toluca following a difficult time for the club, with the Enrique Triverio situation. Another defeat leaves León bottom on 8 points, and surely out of the liguilla race.

Paco Jémez showed the faith that he has in his side on Saturday, as he addressed Tigres’ main strength head on. A high pressing game, with a very high defensive line, prevented Tigres from playing their slow, possession style.

Cruz Azul pressed their opponents at every opportunity. Most obvious was their shape when Tigres had a goal-kick. 3 players were pushed forward to man-mark central defenders Hugo Ayala and Juninho, and holding-midfielder Guido Pizarro. This forced Tigres to play long from goal-kicks.

Despite this, whether or not the tactic was effective is up for debate. Cruz Azul did have chances to win the game, Martín Cuateruccio and Jorge Benítez missed the best opportunities, whilst a stunning “Chaka” Rodríguez tackle prevented a certain “Chaco” Giménez goal.

However, the press left plenty of gaps in-between the lines and, particularly, behind the defence. Tigres exploited these gaps on occasion, and had Jurgen Damm been more composed, he may have scored twice.

Tigres could have made more of the gaps left by Cruz Azul had Lucas Zelarayán been brought on. “El Chino” has the ability to pick out incisive through balls, and might have had a key impact on Saturday’s game.

The opposition are pressing high and you leave the player most capable of picking out a through ball (Zelarayán) on the bench. Hmm.

Overall, Paco Jémez did extremely well to disrupt Tigres, but his side weren’t able to win the game, and may well have lost what was a tactically fascinating encounter.

Pachuca crumble without Lozano and Gutiérrez

Pachuca’s 3 amigos; Hirving Lozano, Erick Gutiérrez and Rodolfo Pizarro have been key to Los Tuzos for so many seasons. With the talents of the trio, many have wondered how Pachuca would cope without these players. On Saturday, we got an idea.

Pizarro has, of course, moved on to Chivas, whilst “Chucky” and “Guty” were missing for the Querétaro game. Pachuca have other talented youngsters to bring in, like Ricardo Alvarado and Erick Aguirre, but currently they aren’t near the level of Lozano and Gutiérrez.

89.6%. Erick Gutiérrez has the highest passing accuracy in #ligamxeng ? pic.twitter.com/62MAHUtSFK

Diego Alonso’s side were all over the place at the start of Saturday’s game, as Querétaro raced into a 2-0 lead in 12 minutes. The 2nd goal was particularly alarming, as Los Gallos Blancos exploited a huge amount of space on the counter attack. It was the sort of counter that you’d usually only see late on in a match, and might not have happened had captain Gutiérrez been on the pitch.

Pachuca have built a remarkable youth and recruitment setup, which should ensure long-term success. However, if they do lose Chucky and Guty, Los Tuzos will find it very difficult to replace them, and may struggle in the short-term.