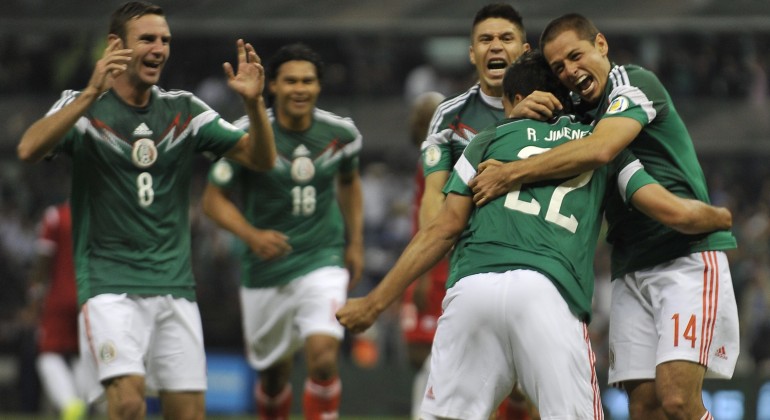 A couple of Friday’s from now, Mexico’s National Team, El Tri, will take the field once again in match that matters… a lot. CONCACAF’s hexagonal qualifying tournament will resume as Mexico will host Costa Rica in the venerable Estadio Azteca. The Ticos come into the tie in first place on 6 points, while Mexico sits in second, two points behind. A few days later, Mexico will make the trip South to Trinidad and Tobago to take on the Socca Warriors. Collecting all six points would be ideal, but four points should keep the coach Juan Carlos Osorio’s seat cool. Anything less, however, will ratchet up the temperature quick-style. And the two biggest games of the hex loom in June.

Back in November, Juan Carlos Osorio fielded arguably the absolute strongest side he could.

He had no choice.

Let us not forget that Mexico was playing in Columbus after being humiliated in Santa Clara by Chile in la boda roja. It was Mexico’s worst loss since Rummenigge and company hung a sixer around Mexico’s neck in 1978. Whether the FMF would admit or not, Osorio’s job was on the line. He had a point floor that he had to reach. I had it pegged at 2. He got 4 after getting that Columbus monkey off Mexico’s back. A massive, emotionally draining win, was followed by a predictably listless performance in Panama, where both teams were happy to walk away with shared points.

But back to the 23 Osorio chose for those games for a second. If that was the best Mexico could muster, it stands to reason that most of the names will be on the list again, right? Is it time to Waltz to Moscow?

Aguantense, muchachos. Let’s not try to decipher the Cyrillic alphabet just yet. A lot has happened in those five months, namely injuries, and inactivity, so let’s recap the November list.

Here is an area on the field where Osorio does not have to worry. It is Mexico’s deepest position. Ochoa has been instrumental in stopping Granada’s bleeding while Tala and Corona have been their usual solid selves.

Who gets called? These 3 should expect to get a call.

Carlos Salcedo has seen his playing time dry up in Fiorentina, Miguel Layún has been sidelined with a nagging injury. The rest have been consistent performers, so there should not be any surprises here. Jorge Torres Nilo might sneak in as insurance in case Layún is not CDMX match fit. Diego Reyes has been killing it in Mont Juic, and Nestor Araujo is enjoying one of his finest campaigns, as has his beard.

Who gets called? Don’t expect any major surprises from this group. Expect the lot to get called back, maybe with a Torres Nilo switcheroo for Salcedo.

Here is where things get interesting

Aquino is out injured, and Herrera is just now coming back after a gruesome foot injury that required a bajillion stitches. He has not played in nearly a month. Marco Fabian just this past weekend saw the field for the first time since before Christmas. It would be foolish to call either of those two back, regardless of their quality.

So who does Osorio call in their stead. There are plenty of options. ‘Gallito’ Vasquez is one of the reasons Chivas has climbed to the top of the leaderboard, and a big reason why Orbelin Pineda has become, in this writer’s opinion, the best Mexican midfielder on the planet. Osorio, though, favors the tall, lanky midfielders, which opens the door for Jesus Molina and ‘Gullit’ Pena.  Neither have done much to write home about, though.  To replace Aquino, Osorio need not look past one of his Tigres teammates. Jurgen Damm has been impressive when it mattered most, and he has an extra gear you just don’t see on Mexican sides. Erick Gutierrez may round out the group, but would be hard pressed to make the field in either game.

The injuries in the final third are the genesis for Osorio’s heartburn, hair loss, and colitis. 2017 has been as bad a start for this group as we have seen in a while. Before we stick our collective heads in the oven, let’s review who was called in November

Now let’s take a look at this group one by one.

Giovani is proving once again that he may not use the best judgement when it comes to his own body. Countless muscle injuries have dogged his promising career, asnd that trend has continued in LA. Is it fatigue or the Tommy Burgers? His bum hammy will be keeping him out of this call. But let’s be realistic, how much was he going to contribute after being off for 5 months?

Chicharito started the year well enough. He got plenty of goals, but it won’t masquerade the fact that Leverkusen are not a good team. It also does not help that he just does not play well at the Azteca. He has only scored 1 goal in official matches at the Coloso. Relax!  I am not trashing your boyfriend, just stating the facts. Nevertheless, he is a must-call. The Cheech is one of the best players on the planet in creating space for himself in tight spots. And he seems to score better with short hair. How is he going to do with no hair?

Carlos Vela is Mexico’s most dangerous player. So the news last week, that he had left RS training with an injury had to induce a severe projectile vomiting reflex from JCO. I hope no one was in front of him. But then the focos rojos suddenly were gone. The injury wasn’t that serious, but he was doubtful for the Basque Derby. Then he went the full 90 in a losing effort. If you felt a strong southern breeze, it JCO breathing a sigh of relief. Vela may not be up for the full 90, but even a half from him is worth making the trip.

Add Tecatito Corona to the walking wounded. He is on the sheet to play in the Champions League, though. Another player who is not match fit, but needs to make the trip. I mean, we need him for the rotaciones anyway, right? Right? RIGHT?

Raúl Jiménez – This one just sucks. Our boy was injured in those meaningless September qualifiers.  It was to be the catalyst for a series of unfortunate circumstances that plagued what should have been his breakout season. The injuries mounted, and he could not have warmed the hearts of Benfica’s Board when he turned down that monster Chinese contract. He will probably get called, but he might have to show something special to get some PT, even with the rotaciones. Out of this group, he would be the first cut. And that just sucks.

Oribe —   The pretty one will be playing in his home stadium. He has scored a lot of goals for Mexico in the Azteca as well. He is also fresh off a Cruz Azul-killing double… at the Azteca. How else would you like me to say that Oribe should get the start?

Hirving ‘Chucky’ Lozano — This is a big, big loss. There is no doubt. ‘Chucky’ plays downhill, influences the game, makes opponents pucker real, real tight. In short, he is really good. There is a reason he leads the free world in getting hacked. But he will be back. It opens the door for some very willing able gentlemen callers.

Who will get Osorio’s rose?

Jesus Gallardo – Pumas. He is not ready yet. But we do have hope for this young padawan.

Rodolfo Pizarro – Chivas. He is the leading scorer on the 1st place team. He may not be as dangerous on the ball as Lozano, but he has what Lozano lacks, a nose for the goal

Angel Zaldivar – Chivas. Has been more consistent than he more high-priced playing partner.

Alan Pulido — Chivas. See above, but it’s Liga MX. Even before the 10-8 rule it was hard to find forwards.

Javier Eduardo Lopez – Chivas. Before you accuse me of being a Chofichaser (save your breath, I am), hear me out. Who else plays the way Chofis does? He is a playmaker and game changer, which is something that Mexican soccer has historically lacked. 30 minutes of Chofis is better than 90 minutes from most players. I know he has not been called, but he is worth taking as the wild card. But it won’t matter because Pulido will get the nod for reasons that have nothing to do with what happens on the pitch.

Who starts at the Azteca:

Jonathan Dos Santos deserves a start, but he has NEVER played at the Azteca as a professional. You need legs and lungs, especially there, and Orbelin is up to the challenge. Jona would be better suited at sea level. He will start vs T&T. Something which I will discuss in more detail in my next column.