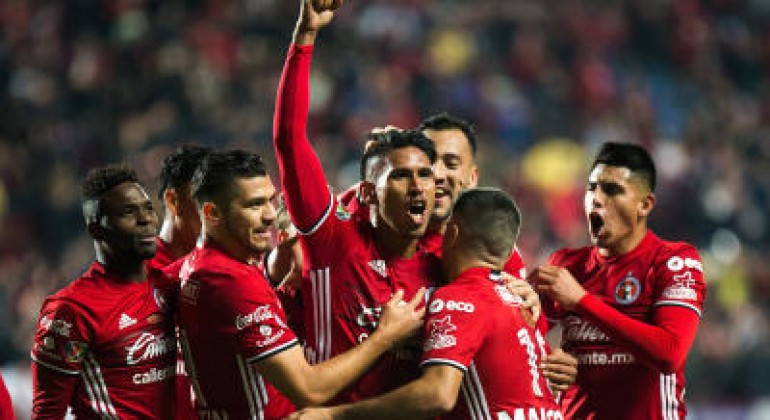 Jornada 4 was quite the disappointment, but there was still plenty to learn from the weekend’s action. Tom Harrison has you covered with his weekend review.

There’s normally something special about Liga MX on a Saturday. 6 hours of wall-to-wall fútbol, including multiple games at some times, which isn’t great for analysis, but can be very entertaining. The community also comes alive on Saturdays, with significantly more involvement on twitter than during most stand-alone matches.

This Saturday was a major disappointment. With the exception of Atlas’ entertaining victory over Morelia, which most didn’t see due to the other matches on at that time, there were just 2 goals scored in 4 games.

Most surprising, and disappointing, were the Monterrey-León and Pachuca-Toluca matches. Both were potential liguilla ties, with all 4 sides stacked full of talent and very capable of entertaining.

None did, as both games ended in drab 0-0 draws. Just 13 shots on target were made during Monterrey-León and Pachuca-Toluca. Los Rayados had more on their own when they played Chivas earlier this season.

Hopefully this dreary Saturday will be an outlier in what has, so far, been a pretty good Clausura.

This Liga MX weekend, only three matches finished with more than one goal. #ligamxeng

After losing key attackers Dayro Moreno and Gabriel Hauche over the winter break, many would have expected Tijuana to struggle to match last year’s 1st placed finish. But a third win in a row sees Los Xolos back at the top of the pile.

Cruz Azul had more possession, and more than twice as many shots as Tijuana on Friday night, but Miguel Herrera’s men, who have reverted to his favoured 5-man defence, found the only goal of the game. Juan Carlos “Topo” Valenzuela grabbed the winning goal, heading Víctor Malcorra’s free-kick into the bottom corner.

Tijuana don’t have anything near the swagger and style of last season, but are still a very tough side to beat. It would be a surprise to see Los Xolos match their Apertura achievements, but don’t count them out yet.

But Pumas produced a highly impressive second-half display, to make it three wins on the spin. Clever movement helped Nicolás Castillo grab his second goal in Liga MX, before Pablo Barrera hit a fantastic strike from the edge of the box.

After going behind, Necaxa didn’t look like getting back into the match, and Bryan Rabello secured the three points with an incredible, powerful, long-range golazo. Whisper it quietly, but we may, just may, get to see the best of Rabello at Pumas.

Small errors, and clever pieces of play, can have huge impacts on the outcome of matches. “Chapo” Sánchez’s winning goal against Querétaro offers the perfect opportunity to illustrate this point.

When Orbelín Pineda picks up the ball, he has a bit of time before being pressed and having any penetrative passing lanes cut off. If an opponent, particularly one with the vision of Orbelín, has time on the ball, the area behind the defence becomes dangerous, as a through ball may be attempted. In this situation, defenders should drop off slightly, but Ángel Sepúlveda (bottom-right) isn’t a defender. Instead of dropping off, he steps up, probably with the idea of making an interception.

With Sepúlveda committed to a forward movement, Sánchez runs in-behind him, into the vacated space. Meanwhile, Pineda plays a pass right into that danger area.

Orbelín’s pass finds “Chapo” in the box, and the Chivas right-back finishes the one-one-one opportunity. It would turn out to be the only goal of the game, winning all 3 points for Chivas.

The decisive goal stemmed from just 4 small pieces of play. For Querétaro, there wasn’t enough pressure on Orbelín, and Sepúlveda made an error in stepping up. For Chivas, Pineda had the vision and quality to pick out a pass into the danger area, whilst “Chapo” Sánchez was aware of Sepúlveda’s movement, and cleverly exploited the danger area. In a low-scoring game, small correct and incorrect decisions can make all the difference.

Ever since Sergio Bueno took over Chiapas, their performances have been fantastic. Los Jaguares, who were terrible to watch under José Cardozo, have re-found their beautiful style of fútbol under Bueno.

Last season Chiapas outplayed the likes of Monterrey, León, Querétaro and Necaxa, but failed to pick up victories due to an inability to deal with through balls, particularly aerial ones. As Bueno’s side weren’t able to turn performances into results, few took notice of the incredible football Chiapas played. But after shock wins over Toluca and Tigres, they’re getting the credit they deserve.

Bueno needed to improve his defence over the winter break, but, perhaps due to a lack of funds, didn’t bring in any re-enforcements. Despite this, he has been able to boost his side’s defensive solidity. Chiapas are still far from impressive at the back, and were fortunate to come up against André-Pierre Gignac and Ismael Sosa on an off-day, but they haven’t been opened up as often this season as they were last campaign.

To the credit of Bueno, this defensive improvement hasn’t come at the cost of their attractive style. So far this season, Bueno’s been fielding a 4-4-1-1 formation with 4 attacking players in the midfield; Matheus Goncalves, Lucas Silva, Dieter Villalpando and “Quick” Mendoza.

Ever since Bueno took over I've been banging on about how well Chiapas have been playing. Now were seeing results. #ligamxeng

This quartet, along with enganche Jonathan Fabbro, linked up fantastically well against Tigres, with quick interchanges, clever flicks and seemingly an impressive understanding of la pausa (the concept of delaying a pass, usually in order to draw in an opponent, thus giving your teammate more time on the ball).

Sergio Bueno deserves plenty of credit for sticking to this style in the face of relegation, and managing to improve his side’s defense despite a lack of new additions. If Chiapas can keep this up, they’ll save themselves from relegation, whilst entertaining fans.

And it was this Bryan Rabello goal that sealed the three points for Los Pumas #FutMexNation #LigaMXEng pic.twitter.com/20gQibhrUg