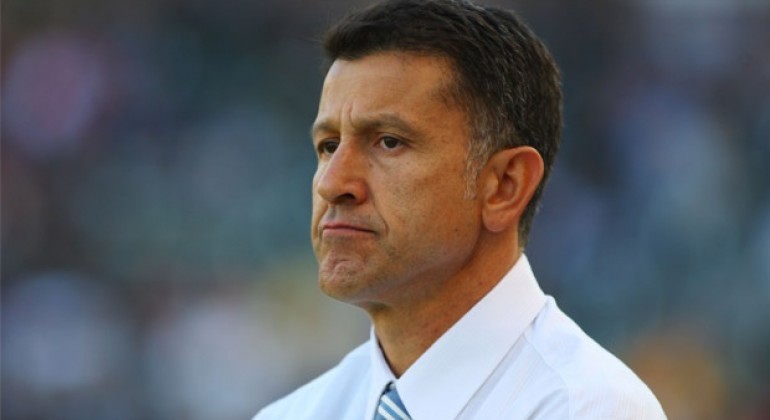 Multiple pundits have been queuing up to predict that Mexico will play a 3-3-3-1 formation against the US in Columbus. The US usually play with 2 up front, and Mexico coach Juan Carlos Osorio believes in the need for an overload defensively. Therefore, if the opponents play with 2 strikers, Osorio will use 3 centre-backs.

Historically, when Osorio has played with 3 centre-backs during his time with Mexico, the uncommon, unorthodox 3-3-3-1 system has been selected.

What makes the 3-3-3-1 such an uncommon and unorthodox formation is the lack of full-backs or wing-backs. Full or wing-backs are crucial to preventing opponents from attacking freely in wide areas, and offer width, and simple passing options when playing out from the back.

During the game against Uruguay in the Copa América Centernario, when Mexico played the 3-3-3-1, they weren’t exploited in the wide areas. But they played against a very narrow side. Wide men Carlos Sánchez and Diego Rolan like to cut inside, and their two full-backs during that game, Álvaro and Maxi Pereira, didn’t often push forward. The system worked.

It didn’t work during the next Copa América game against Jamaica though. Jamaica turned up with threats down the wings from the speedy and tricky Jobi McAnuff and Garath McCleary. The pair regularly found space in wide areas, and were often able to beat Mexico’s outside centre-backs who struggled to deal with their change of pace.

If striker Clayton Donaldson was more clinical during this game, and didn’t look to win quite as many penalties, Mexico may not have won this game.

The recent friendly against New Zealand, another game where Osorio fielded a 3-3-3-1, again illuminated how the system gives opponents spaces in wide areas, which can be exploited.

Juan Carlos Osorio needs to find a way to cover the wide areas whilst playing the 3-3-3-1 formation. This needs to be done without Mexico losing their defensive shape, and without players being drawn too far away from their positions.

Covering wide areas whilst maintaining shape appears highly challenging. If one of the 3 centre-backs shifts across to deal with a wide player, the 3v2 numerical advantage against opposition forwards is gone, defeating the purpose of playing with 3 centre-backs.

If one of the 3 midfielders cover the opposing wingers, Mexico will lose dominance in the centre of the field. Mexico’s central-midfielders may also feel uncomfortable out wide, unless Miguel Layún and Jonathan Dos Santos are selected to play this role.

Finally, if Mexico’s wide players are given the task of tracking back, therefore playing more like wing-backs than wingers or inside-forwards, their attacking impact will be reduced. It will also be difficult for the players to quickly transition from attack to defence, and vice-versa. In addition, maintaining stamina for 90 minutes whilst covering wide areas in attack and defence may be a challenge.

Whatever Osorio’s solution, given the lack of time that he has to work with his players before the US game, one of the major challenges of international football, Mexico’s players may struggle to fully understand the tactic.

But will the wide areas matter?

Games can be won and lost in the wide areas, but only if midfield battles are won, and a team enjoys a fair amount of possession. If Mexico can dominate the midfield, keep the ball for the majority of the match, and stifle the US, spaces in Mexico’s wide areas may not impact the match.

The narrow 3-3-3-1 should help El Tri dominate the centre of the pitch in Columbus, as Mexico are likely to enjoy a numerical advantage.

If Mexico are able to control the midfield and monopolise the ball, wide areas in the USA’s defence are likely to be more important. Osorio likes to attack down the flanks, and has a huge quantity of talent out wide at his disposal.

A possible Mexico team against the US. Raúl Jiménez could get the nod at right-wing in order to have another player who’s strong in the air.

Osorio could surprise the pundits and use a different formation against the US. The most likely choice would be a 4-3-3, which, on paper, suits Mexico’s current set of players best.

Choosing a right-back and centre-back pairing for a 4-3-3 will be challenging for JCO, but he’s able to select from plenty of talented players for the midfield and forward positions.

A 5-2-3; with 3 centre-backs, 2 wing-backs, 2 central-midfielders, 2 wingers and a centre-forward, is another option. Osorio tried this formation out against Honduras.

Mexico have a fantastic squad, and hopes are high that they can end the 2-0 streak in Columbus on Friday. But the likelihood of Juan Carlos Osorio fielding a 3-3-3-1 formation against the US is concerning.

The US have plenty of speed down the flanks; from the likes of Christian Pulisic, Lynden Gooch, Fabian Johnson and DeAndre Yedlin, and may experience plenty of joy in wide areas against Mexico.

The weakness of the 3-3-3-1 was clear to see during games against Jamaica and New Zealand, and a stronger opposition could further exploit the flaw in the system.

This flaw may be fixed by Osorio during training, after learning from previous games, or this flaw may not be exploited if Mexico dominate the midfield.

Whether or not JCO has managed to address the weakness of the 3-3-3-1 is another fascinating aspect of what is likely to be a dramatic game between the US and Mexico. However, he may surprise and select a different formation. With Juan Carlos Osorio, how Mexico will line-up is always uncertain.