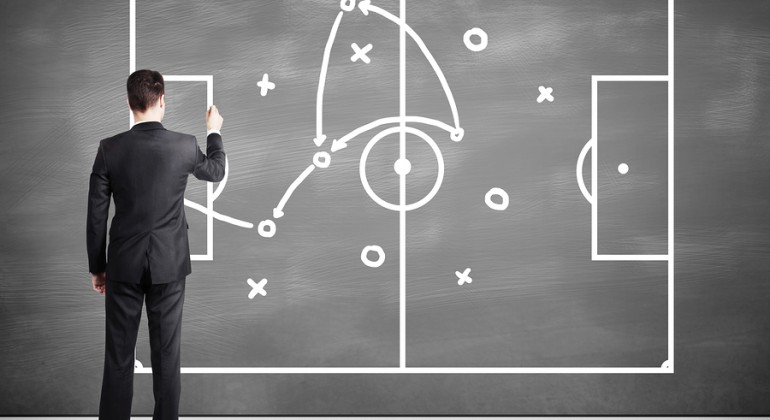 Liga MX isn’t known as the most tactical league on the planet, but there is a certain level of tactical variation between managers in the division, particularly from those with experience abroad. Here, tactical aficionado Tom Harrison will take a look at some of the quirkier tactical systems that have been used in Liga MX this season.

With Fernando Uribe, Enrique Triverio and Alexis Vega available, Toluca started this season with two strikers, as they did during the previous campaign. A late signing added a complication to the system though. Pablo “Pitu” Barrientos, a highly skilled and intelligent attacking midfielder simply couldn’t be left out of the starting line-up.

Toluca manager Hernán Cristante evidently didn’t want to sacrifice the defensive protection that midfielders Antonio Rios and Erbín Trejo provide, and decided against dropping Carlos Esquivel and playing with a narrow diamond midfield. Therefore, he was left without a left midfielder/winger in his system.

Cristante has been brave and adopted this asymmetric formation, with a wide midfielder on the right but not on the left. A fluid system, the space vacated by the lack of a left-midfielder has often been filled by Alexis Vega or Erbín Trejo drifting wide, or left-back Óscar Rojas pushing forward. Meanwhile, “Pitu” Barrientos has run games from his “free” attacking-midfield role, and Toluca are unbeaten since the Argentine joined the club, and this system was adopted.

Toluca played without a formal left-winger against Puebla and Cruz Azul, but Vega (9) and Trejo (26) drifted across to the left side

This allows two things to take place. Firstly, the left-winger, which has been canterano Jesús Gallardo in recent games, can stay very wide to create more space centrally, and help him get one-on-one situations with the opposition right-back. Secondly, central-midfielder Javier Cortés is able to push forward into a centre-right attacking midfield position. This helps get to get the best out of the creative Cortés, who’s better going forwards than defensively.

Enrique Meza transformed Monarcas Morelia over the summer from a functional, pragmatic outfit to an exciting side capable of playing beautiful football. Key to this transformation are the two international signings who play in attack for Morelia; Chilean Diego Valdés and Peruvian Raul Ruidíaz.

Valdés and Ruidíaz are both well-rounded attacking players, as capable of dropping in and playmaking from an attacking-midfield position as they are at leading the line and attempting to get on the end of crosses and through balls. The pair have also quickly developed a good understanding, and therefore they constantly switch roles during games. When one drops in, the other pushes forward, and vice versa. This helps to drag around opposition defenders, creating more space to Morelia to play in.

Morelia’s fluid, rotating, front two have been very entertaining to watch, and effective, this season. Both Valdés and Ruidíaz have impressed so far, with 11 goals between the pair. Many have even described Ruidíaz as the signing of the season.

In both examples, Morelia’s furthest forward player on average is a winger, showing how both Ruidíaz (9) and Valdés (19) drop in regularly

Tijuana’s regular starting line-up consists of four attacking players. Target-man Milton Caraglio spearheads the attack, whilst Avilés Hurtado, Gabriel Hauche and Dayro Moreno play in behind. Usually Avilés plays on the left, with Hauche through the middle and Dayro out on the right.

However, manager Miguel “Piojo” Herrera has been able to develop great fluidity between the front four, and they regularly switch positions. Caraglio stays centrally, but drops in to draw out the opposition defenders, hold up the ball and release runners in behind. Meanwhile, Hurtado, Hauche and Moreno regularly switch positions throughout games, with all three taking turns at playing the key “number ten” role.

This constant switching creates the average player position maps seen below. The high level of fluidity results in all players in, or near to, the middle on average.

With Los Xolos placed at, or near to, the top of the table all season long, it’s been a highly successful Apertura so far. The fluidity of their attack, which makes it difficult for opposition defences to man-mark, has been a crucial part of their success.

In some games Tijuana’s front four almost play in the same position on average, but only because they are regularly switching role