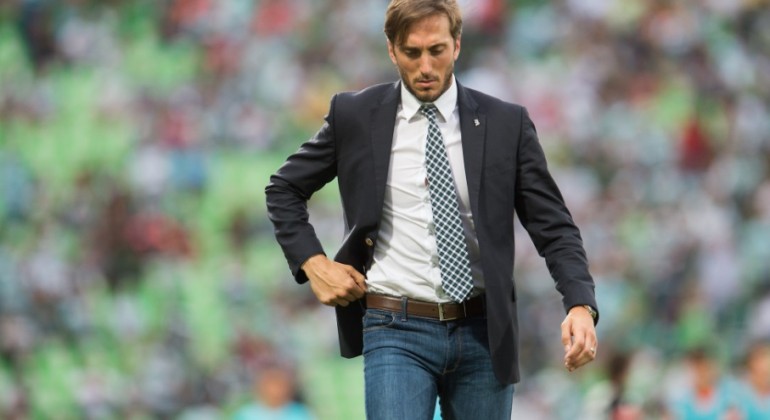 Cast your mind back to the end of the 2015 Clausura. Despite finishing in eighth in the table, a mixture of pragmatic football, creativity from Néstor Calderon, superb keeping by Agustín Marchesín and one incredible performance from Javier “Chuletita” Orozco led to Santos Laguna taking the Liga MX title. Portuguese boss Pedro Caixinha received praise from all corners of Mexican football for taking a side seen as a mid-table team to Liga MX champions.

With Caixinha only in his forties and seemingly more tactically aware than most managers in Mexico, the future seemed bright for Santos. Just five games into the 2015 Apertura, all had changed. Four defeats from five resulted in Caixinha leaving Los Guerreros, and Santos have struggled to replace him since.

Highly rated coach Pako Ayestarán, now in charge of Valencia, appeared a good replacement for Caixinha at the time, but he didn’t last long. After four victories in 17 matches and a 15th place finish in the 2015 Apertura, Ayesterán left by mutual consent, and Santos were left manager less going into the 2016 Clausura.

Ex-Liverpool assistant Ayesterán had a nightmare spell in Torreón

Santos decided to make another interesting appointment. Argentine Luis Zubeldía, just 34 years of age, was brought in, and got off to a good start, winning three of his first four league games. Overall, Zubeldía’s Santos weren’t the most exciting side in 2016 Clausura, scoring 22 in 17, with Luis’s tight-fitting jeans often drawing more interest, but they made it in Liguilla, and narrowly lost to eventual champions Pachuca in the quarter-finals.

Exciting attacking additions in the summer; wingers Mauricio Cuero, Fredy Hinestroza and striker Jonathan Rodríguez, all of whom with European experience, were expected to make Santos a more interesting, and threatening, side. Quite the opposite has happened so far, with Santos scoring in just one of their five league games this Apertura as Los Guerreros sit 17th.

Zubeldía looked less and less sure of how to find goals as this season’s progressed, with the Argentine becoming seemingly desperate, attempting to solve the lack of goals by throwing on as many attackers as possible without much of a plan. Three strikers started against Chivas, attackers were often subbed on for defenders and 20-year-old Gael Sandoval, normally a winger, was used as a right-back.

Failing to get the best out of a strong set of attacking players was Zubeldía’s main problem throughout his spell in Torreón. The enigmatic Bryan Rabello, Djaniny Tavares, Ulises Dávila and Andrés Rentería never reached the heights they’re capable of with Zubeldía at the helm, and whilst he can’t be held entirely responsible for this, the Argentine’s training and tactics are very likely to have had an impact on their performances.

Following Sunday’s defeat to Chivas, Santos announced that Luis Zubeldía has left the club, and José Manuel “Chepo” de la Torre has been confirmed as his replacement. Formerly in charge of Mexico, Chivas and Toluca, Chepo represents a shift in policy from Santos, hiring a man with plenty of experience in Mexico, as opposed to a, perhaps, riskier foreign appointment.

de la Torre is often criticised by Mexicans following his disastrous attempt at qualifying for the 2014 World Cup, but Chepo did a fairly good job with Chivas, and was harshly sacked by the Guadalajara side during the 2015 Apertura. Taking over a struggling side, with confidence and morale likely to be low, is never easy, but Chepo should be excited to manage a side filled with talent.

His main challenge is to try to find the formation, tactic and line-up that gets the most out of the talented Santos squad. If Chepo is able to do this, I don’t see why Santos can’t pick up their form and still make a play-off push this campaign. Agustín Marchesín, Carlos Izquierdoz and Jesús Molina is a solid spine, and in attack the likes of Bryan Rabello, Ulises Dávila, Djaniny Tavares, Mauricio Cuero, Fredy Hinestroza and Jonathan Rodríguez have all done enough in the past to earn moves to European clubs.

Watching who Chepo plays, and how they play, in the coming weeks should be fascinating. It might seem unlikely, but de la Torre may turn out to be the long-term replacement for Pedro Caixinha.