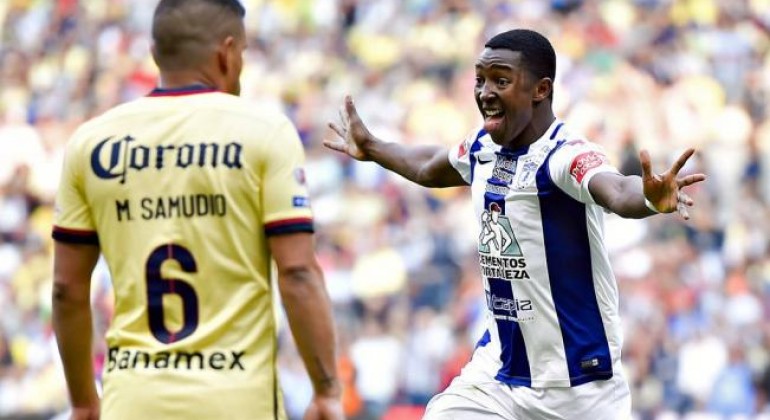 You’ll be forgiven for thinking Pachuca are a three-man team. After all, the vast majority of credit for their impressive run to the final has gone to their three Mexican youngsters; Chucky Lozano, Rodolfo Pizarro and Erick Gutiérrez, and to the club for developing such talented young players. Whilst all three have been superb this season, Pachuca are by no means a three-man team.

This season’s success is thanks to quality performances from the whole squad, and their crop of foreign players and dual-nationals have been a huge part of their run to the final. These players deserve just as much credit as Lozano, Pizarro and Guti, and the Pachuca scouting and recruitment team should be praised as highly as the youth recruitment team. That’s why I’ve decided to highlight Pachuca’s key foreigners and dual-nationals.

The obvious player to start with is Pachuca’s player of the Clausura in my eyes. Brought in from Atlético Nacional in the winter transfer window, Murillo’s been extremely impressive in the Clausura, as Pachuca have conceded less than half the goals they did in the Apertura. The Colombian’s ability to read the game and step in at the right time is his most noteworthy attribute, whilst his physicality, both pace and strength, is another major positive aspect of Murillo’s game. It’s no surprise that Colombian coach José Pekerman has handed him an international debut this year.

The other half of Pachuca’s imposing centre-back pairing is Omar González. Also signed in the winter, from LA Galaxy, González has, like Murillo, performed extremely well in his first season in Liga MX. At 196cm tall, González is superb in the air, an aspect of the game which Pachuca often struggled with when Aquivaldo Mosquera and Hugo Rodríguez were the centre-back partnership in the Apertura. His absence from the US Copa América squad is bizarre.

Colombia’s answer to David Luiz may have finally found his perfect position, at right-back. Used mostly as a centre-back by Monterrey, Medina’s lack of concentration and discipline was, much like Luiz, often exploited, leading to Los Rayados letting him go out on loan in the winter. Diego Alonso has decided to use Medina as a right-back instead of a centre-back at Pachuca and thus far it’s been a great move for Medina. He’s become ­­another important part of the solid Pachuca defence.

16 goals in 29 Liga MX games this season, need I say more? Well, yes. Jara’s goal record is superb, and has been a crucial part of Pachuca’s success, but he offers much more than just goals. Hard working and intelligent on and off the ball, Jara is a useful link up player for Pachuca and his movement often creates spaces for their other attackers to exploit. Whilst Ariel Nahuelpán has an impressive scoring record for Los Tuzos, Jara’s all-round game has helped take Pachuca to the next level.

A former Benfica player like Jara, Urreta is one of the most creative players in Liga MX. Injuries and competition with Rubén Botta has limited Urreta to making just 16 starts in his debut Liga MX season, with an additional 11 sub appearances, but he’s been able to make a huge impact in that time. Six goals and 11 assists is a remarkable record, and is no surprise when you see Urreta’s dribbling, passing and crossing abilities.

There’s probably not a single person in the world who’d agree with me, but in my opinion Rubén Botta is the most talented player in Liga MX. With unbelievable skill, close control and an ability to pick out passes that someone with a bird’s eye view of the pitch wouldn’t see, Botta’s on another level to anyone else in the league for me.

The problem has been turning that talent into effectiveness. It so often feels like Botta is just playing a different game to the rest of his team mates. For example, he’ll regularly play incredible through balls that no one else can spot. But as no one else can spot the pass, no one’s made the run. Despite not channelling supreme talent into effectiveness on a consistent basis, Botta’s occasional moments of outrageous magic have contributed to Pachuca’s run to the Clausura final.