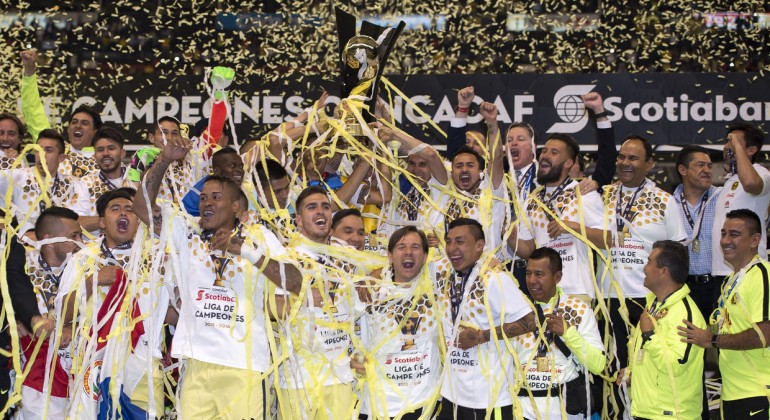 Going into the second leg at Estadio Azteca two-nil down, Tigres were given a great opportunity to get back into the CONCACAF Champions League final as Nacho Ambríz adopted a bizarre tactical approach. Testing out a new formation that hasn’t been used all season in a final is potentially suicidal, but that’s exactly what Ambríz did as he set up his América side in a 4-3-3 formation. To add to the bizarreness and riskiness of the tactic, two of the midfield three were attacking midfielders; Rubens Sambueza and Rifle Andrade, and the one sitter in the middle was Osvaldo Martínez, a player that excels in creating chances, but can struggle defensively.

The chance was there for Tigres to comeback from the two goal deficit, but they weren’t able to take it, making it the Monterrey sides’ second continental final defeat this season after falling to River Plate in the Copa Libertadores final last year. The loss, combined with Tigres’ poor recent form, has really highlighted the tactical shortcomings of manager Tuca Ferretti.

Reliant on 1v1’s in attack

There’s no doubt that Tuca Ferretti is a master of ball retention, but there’s no point having the ball if you can’t do anything with it. On Wednesday night Tigres turned 62% possession into just four shots on target, not good enough when needing a minimum of two goals.

As ever, Tigres were cautious in attack, with full-backs Jorge Torres Nilo and Israel Jiménez, and centre-mids Guido Pizarro and Jesús Duenas rarely venturing forward to offer support to the attacking players. Without supporting runs from deep, Tigres’ attack becomes reliant on four 1v1 battles; the two wingers against the two opposition full-backs and the two strikers against the two opposition centre-backs.

Earlier this season the class of players like André-Pierre Gignac, Rafael Sóbis and Javier Aquino was shining through, and Tigres were winning these 1v1 battles. But in recent months; perhaps due to fatigue, perhaps due to opposition defences working out how to defend against Tigres’ star-studded attack, Los Universitarios have often lost the 1v1’s. Goals and victories have dried up as a result.

Had Ferretti taken a few risks and pushed forward the full-backs and/or centre-mids on occasion they may have created overload situations against an América side with very little defensive cover from the midfield.

Gignac’s goal was as good as it got for Tigres

A cautious approach is still a risky approach

Moments of individual brilliance can change football matches. One man especially capable of producing these moments, particularly in big games, is Miky Arroyo, and that’s exactly what he did in the 68th minute on Wednesday. Gignac produced the brilliant moments in the semi-final against Querétaro, but you can’t always rely on these moments going your way, and Arroyo’s superb goal effectively killed off the Tigres challenge.

On the surface, being cautious, for example not pushing forward the full-backs, would appear a safe approach in a situation when Tigres could barely afford to concede. But Tigres were always vulnerable from a moment of brilliance, and perhaps being more adventurous and looking for a second goal, mitigating from the impact of conceding, may have been a better approach.

Tigres were unable to respond effectively after Arroyo’s golazo

Tuca Ferretti reacted to the Arroyo goal by sending on striker Fernando Fernández for Israel Jiménez as Tigres needed to score twice to avoid defeat. The substitution was a positive move from Ferretti as Tigres searched for a way back into the game, but, as has so often been the case in Liga MX, they failed to place significant pressure on the América goal. In fact, América dominated the game after Arroyo’s goal and were able to score a second as Osvaldito smashed home from the penalty spot.

Tigres lacked urgency, still didn’t commit the full-backs forward often and overall looked short of ideas. Tigres clearly struggle when trailing in games late on, in Liga MX they haven’t earnt a draw with a goal in the last ten minutes for over a year, and you have to question whether Ferretti’s got his side working on these situations enough on the training ground.