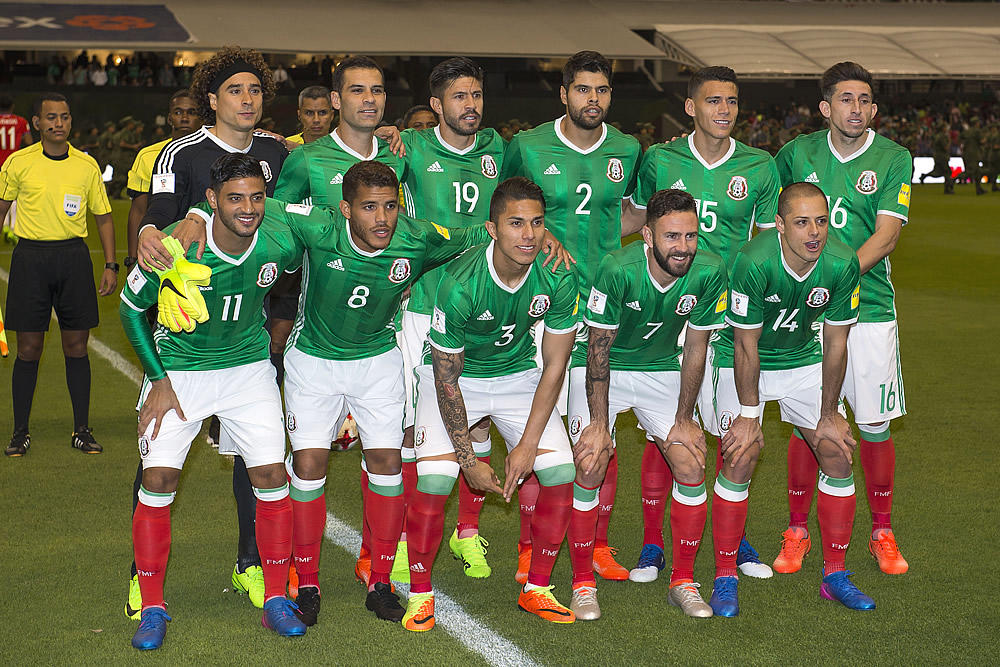 Time is tight.  The 2017 Confederations Cup 30-man preliminary roster is due at the FIFA offices next Thursday.  With European schedules winding down, LigaMX liguilla just getting started, and non-liguilla players getting frustrated on the gold course, Juan Carlos Osorio and his staff need to not only whittle down a Confed Cup roster, they also need to conjure up an entirely different roster for the Gold Cup that starts (ahem) the same week the Confed Cup ends.  As they say in mi tierra – no manches (not really what they say, this is a family show).

So let’s take a look at who we think is going to go where, who should be going where, and who will be going where.  A couple of caveats that we should be aware of.  It will be really hard for players to be in both tournaments.  Also, LigaMX and the FMF agreed that a maximum of 4 players from 1 team can be chosen for Gold Cup roster, which will likely be an all LigaMX side.

GOALKEEPING   The Confed Cup squad is relatively easy to fill out, starting with the Goalkeeping.  Memo Ochoa and Alfredo Talavera are locks.  The expendable one here is Chuy Corona, who is expected to play the Gold Cup.  Who takes, Chuy’s place, though?  Frankly, the pickings are slim.  The 3rd keeper shouldn’t be playing all that much if at all under normal conditions, but with Osorio, you never know.  The reality is you can throw the names of Lajud, Cota, Orozco, and Muñoz into a hat and just pick a guy.  I did, and came up with Cota.

Gold – Corona, Moises, Orozco (but wouldn’t be shocked if Conejo gets a final go)

Cota would be the call here because that gives the coaching staff more flexibility to choose 4 Chivas outfield players for Gold Cup.

DEFENDERS We should not expect too much of a deviation from the last Hex list for the players that will be going to Russia.  Here is a refresher: Carlos Salcedo, Diego Reyes, Rafael Márquez, Néstor Araujo, Héctor Moreno, Oswaldo Alanís, Miguel Layún, Luis Reyes.  It is the Gold Cup defenders that are, frankly, a huge mystery.  Rafa Marquez should be left to recover fully from his old man surgery, but he might be a logical choice to shore up the Gold Cup defense.

But do we really want Rafa at the Gold Cup?  We may not have a choice.  If he had a choice, I am sure he was just as soon skip it.

Rafa should be recovered in time for the Gold Cup, but like we said before, it is going to be up to him if he decides to play.  Not gonna lie, the pickings are slim here.  Montes and Saucedo should be playing together as much as possible, but that won’t happen this summer.  It might happen next summer, though.

MIDFIELDERS The list in March was not necessarily indicative of who would be playing in the Gold Cup due to some injuries, but it does not take a genius to see who will be on the Confed squad.   There will be perennial players heading to Russia who aren’t having the best of seasons.  Couple that with JCO’s penchant for fielding a completely different team from one game to the next, and there is plenty of material there for a disjointed midfield.  Of all of Mexico’s midfielders, there two players who have clearly been the most consistent throughout the year and should be paired accordingly:  Jonathan Dos Santos and Orbelin Pineda.  But they did not play together in March, and they may not play together this summer.  Or maybe they will.  Who the hell knows?  And we cannot forget how much Osorio likes tall DMs

The fact that Hector Herrera is still at Porto does not bode well for his future.  It will be a tough call on Orbelin (whom I believe should start alongside Jonathan and Guardado).  If he is not going to see much action at the Confed Cup, then play him in the Gold Cup and let him BOSS.   Dueñas has been a glue guy for LigaMX’s most talented roster.  He deserves a chance to start in the Gold Cup

FORWARDS Mexico’s deepest position means someone is going to be disappointed they are not going to Russia.  4 Euros are firm in Russia:  Chich, Raul, Tecatito and Vela.  That leaves only two spots, Headache time!

Look at who got called in March:  Jurgen Damm, Carlos Vela, Raúl Jiménez, Oribe Peralta, Javier Hernández, Jesus Gallardo.  The notable names missing on this list were Tecatito and Chuky, who are both shoo-ins for the Confed Cup.   The other notable missing from the list in march was Giovani.  Decisions, decisions.  But that is why they pay us the big bucks here at FMN.

The reality is that Gio has been struggling in a league he should be dominating.  But there is no hiding from the fact that Giovani’s best games in his career have been when se puso la verde.  Damm is a wild card, but Tecatito and Chuky can do what he does, and much, much more.  Tecatito, however, has been injured for most of the second half of the season.  Damm might sneak in because of that.  America’s youngster gets the call for the Gold Cup because why not?  The Molero Gold Cup should be used to get as many young players as much PT as possible.

GENTLEMEN’S AGREEMENT Will it be a Tigres +7 Liguilla?
Report: Osorio’s Squad Lists for 2017 Confederations Cup and 2017 Gold Cup are out
To Top